Back in their day, some areas were considered on the "outskirts" of town. Now they are neatly nestled within local neighborhoods and businesses of Inverness. 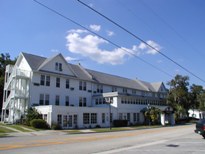 Crown Hotel (formerly the Orange Hotel)
Still of grandeur heritage is the Crown Hotel. Originally constructed in 1880, and later moved to its current location on Seminole Avenue, this splendid building remains as one of several landmark structures in Inverness.

In the early 1920's, the Orange Hotel was originally located on the NE corner of W. Main Street and Seminole Avenue. At one point, it was a boarding house and commissary, operated by Francis Dampier, Sr. Later the 2-story building was moved to 109 N. Seminole Avenue by cutting it in half, raising it and placing it on top of a newly constructed 1st floor, creating a 3-story hotel.

Many memorable social occasions have been held here over the years. In 1926 it was the location of the Citrus High School Junior-Senior banquet. Eva Holden operated her beauty shop on the 1st floor and Charles B. Fitzpatrick operated a law office from this location. Hampton Dunn's book, "Back Home" notes that in 1957 one could get a bountiful breakfast of ham, bacon or sausage, 2 eggs, toast and coffee for 60 cents. Lunch consisted of 2 meats, choice of 3 vegetables, bread, butter and a beverage for 87 cents.

In 1959, "Aunt Tom" Scott sold the hotel after owning it for 58 years. Ms. Scott, who was 22 years old when she purchased it, sold it to an Auburndale businessman, Lynwood N. Smith. It was renamed the Colonial Hotel and later became the Crown Hotel when English investors refurbished the building in 1981. Jill & Nigel Sumner purchased and operated the hotel from 1990 to 2001, followed by the Jensen's, who transformed the hotel to an assisted living facility.

From 1986 to 1992, Larry LaFond worked as a teenager at the Crown Hotel. Though now a California resident, he shares collected photos and history of the hotel. Learn more about this little jewel, the Crown Hotel. 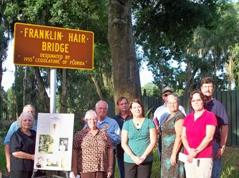 Franklin Hair Bridge
Commonly called the Gospel Island bridge due to the street on which it is located, this structure was renamed in the 1950's to the Franklin Hair bridge, after a young local resident.