It is reported that the Governor suspended Sheriff Carter and launched an investigation of his alleged misconduct in not preventing the lynching of a black man who was accused of, but not tried for, the killing of a local man named Robert Russell. His removal caused an uproar among the citizens who felt the popular Sheriff had been treated unfairly. He was later reinstated by the Governor. 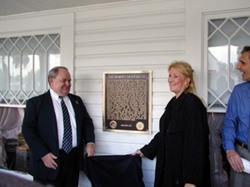